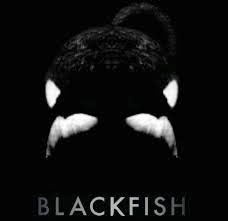 America loves to hate corporations.  They are the man.  They take our money, they operate outside of the law, and they get away with it.  They always get away with it.  And they are about the easiest target for public derision that we as a collective people can treat as a common enemy.  The problem is that we need most of them.  Sure, we hate big banks, but Wells Fargo has an ATM on every corner.  Sure we hate how Ford has been outsourcing American jobs for the last decade, but that new Explorer sure is pretty.  At its core, Blackfish is another corporation-basher.  The difference is that its subject is a corporation that does not provide a necessary service.  It is a company whose services could disappear tomorrow and the world would remain completely intact.  It is a family experience.  It is a child's dream.  It is SeaWorld.

Blackfish is a documentary that examines a lot by way of shady business practices within the park's infrastructure, but its focus is on injuries and deaths caused by their main attraction, killer whales.  Dating back as far as the 1970's the mammals have been used in shows across the country and now internationally.  They are beautiful, and smart, and majestic- all terms that SeaWorld is fine with implanting into its customers' heads.  They are also dangerous, deadly, aggressive, and unpredictable- terms they don't plan on and work very hard to conceal.  Spurred by the most recent trainer fatality, Blackfish is a horrifying look into one of America's most beloved attractions.

The film is at once tragic and informative, emotional and factual.  It highlights the familial construct of killer whales in the wild.  In one tear-jerking interview with a former whale snatcher, a man is haunted by his memories of separating the young from their families.  He remembers being a part of two revolutions in Central and South America and seeing things unbelievable to most people, but claims his experience removing the whales from their families is the worst thing he has ever done.  It is during this interview that we begin to see the face of the business behind Shamu.  The man discloses that during one capture three whales died and to cover that up, they were ordered to cut the whales open, fill them with rocks, and sink them using anchors.  As a result, SeaWorld has been banned in the state of Washington.

But perhaps the most touching of the interviews presented come from the former whale trainers.  They reveal that it is really fairly easy to get a job as a trainer.  No education is required, rather they look for good swimmers and actors.  No experience in marine biology, no former training experience is required.  That part I found shocking.  I assumed years of intensive study were required before  company would take on the liability associated with putting people in the water with whales- KILLER whales.  Nope.  Just sign the waivers and prove you can swim, though scuba experience is a plus.  The former trainers interviewed are all very open about their discontent with SeaWorld's practices.  They provide inside information about how they were never provided inside information.  In the neighborhood of 70 attacks on trainers have occurred in captivity, a statistic you'd think SeaWorld would share with its new and current trainers.  Nope.  Most of those interviewed found out about the track record through independent researchers and discussions with OSHA (Occupational Safety and Health Administration).  Their attachment to the animals, but respect for their nature is remarkably consistent from trainer to trainer.  It does get a bit on the tree-hugging side when they begin crying about animals in cages, but their objective commentary to that point more than excuses the emotional response.

The underlying message in Blackfish that I saw was about our willingness to back corporations that are convenient for us.  SeaWorld isn't charging us $35 every time we overdraft our debit card.  For the average American, SeaWorld has been a positive, even memorable experience.  But its actions are undeniably heinous.  For example, the whale that was responsible for the death of a trainer in 2010 is still performing in daily shows at SeaWorld.  Not only was the animal not put down, it is still being exposed to people on a daily basis.  Worse yet, during an OSHA hearing it was ruled that trainers would henceforth have to remain behind glass, separated from the whales.  Sounds reasonable.  SeaWorld is appealing the decision.  So there is a proven track record of malicious behavior toward both people and animals.  And yet, until this film was released, SeaWorld saw no significant reduction in revenue.

Blackfish is a good documentary, but it does have its shortcomings, and a good deal of them.  First, objectivity.  There is nothing remotely objective about this film.  SeaWorld executives declined for comment but that is more or less an excuse to show only one side of the story.  There are plenty of non-SeaWorld experts who back what they are doing and the feeling I got was that the filmmakers were not particularly interested in finding them.  Documentaries, strictly speaking, don't have to be objective, but I think they run the risk of becoming exploitative if they don't at least try.  And Blackfish really straddles that line.  The film also gets a bit "hippy" and it can be hard to get past.  Some of its interviewees seem a bit like environmental nutjobs, so at times we are still hung up on Johnny Appleseed who was just interviewed instead of the interview we are on with the sane woman.  All of that is to say that as an environmentally conscious and responsible film, Blackfish fails, but as a commentary on our willingness to accept what we hate when it is convenient for us, it succeeds.  At the very least it is fascinating and will probably ruin your next trip to Florida.

Am I awesome, or just a Jerk? Let me know. I promise not to bite, unless you happen to be bacon. In which case I'd like to know how you got off my sandwich and gained consciousness. But I digress...